What is your favorite season? Mine is fall, color-wise. Let me take the advantage of being an editor to share a selection of jewelry pieces that represent fall motifs and demonstrate the variety of warm-shade gems.

For some reason, fall motifs are not very popular in jewelry. Though even the banalest fall attribute, such as a leaf, can be interpreted in different ways depending on which characteristic was chosen to put the focus on. May it be the beauty of the fall palette of colors, the fragility of a dry leaf, or the roughness of its surface.

While wearing a leaf-piece is simply non-trivial, wearing a mushroom-shaped piece of jewelry can be considered extravagant…and be an unpredictable variation in your collection. Let’s say that jewelry doesn’t have to be serious all the time. It can be funny.

For me, the “fallest” gem is citrine. This variety of quartz has a color spectrum that includes shades of yellow, orange, and brown – due to the iron in the mineral structure. According to GIA, citrine is the most sold yellow stone although natural citrines are rare nowadays. Most of them are, in fact, heated amethysts of pale color. By the way, citrine is the brightstone of November.

The group of garnets is rich in autumn colors as well. Shades from bright yellowish-orange to reddish-orange are abundantly displayed by spessartine, mandarin garnet, and hessonite. Garnet is quite common and can be found in many countries, yet gem-quality stones are pretty rare.

A similar color spectrum is typical for carnelian, the red variety of chalcedony. Carnelian (also spelled cornelian) has been known since ancient times. It was widely used during Roman times as a material for carved pieces, such as seal rings, or engraved gems. Carnelian can be heated to enhance the intensity of the redness of its color, and even the heat of the Sun is sometimes enough to enrich the final result.

Yellow and brown shades belong to the diamond palette. Brown diamonds make the biggest number of fancy diamonds. Interestingly they used to be considered only as a material for industrial needs. However, everything changed when brown diamonds from Australian Argyle mines entered the market with attractive names such as “champagne” and “cognac”. Sounds better, than just “brown”, doesn’t it? The marketing trick turned them into a success, and ta-dà(!) brown diamonds were recognized as a jewelry material.

Yellow is the second most common color for fancy diamonds, which makes them affordable. At the same time, some fancy yellow diamonds went under the hummer with the highest prices. For example, a 100.09 carat one “The Graff Vivid Yellow” was sold for a record 16.3mln$ in 2014 at Sotheby’s Geneva, becoming the most expensive yellow diamond ever sold at an auction.

Diamonds in orange color are among the rarest variations.

Sapphires are mostly associated with deep blue color, though it can boast of an impressive variety of shades, including yellow and orange.

Fire opals or so-called Mexican opals are the only types of gem opals that don’t often demonstrate play-of-color. Though its name refers to fire, which perfectly fits orange and red variations, this gem exists also in white and dark brown shades. Fire opals are often transparent, which makes them suitable for faceting unlike other varieties of this gem. 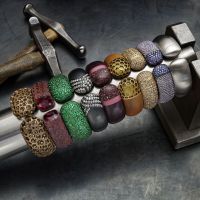 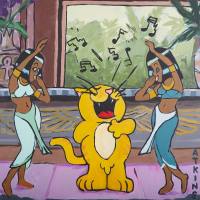 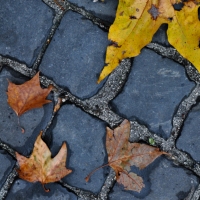